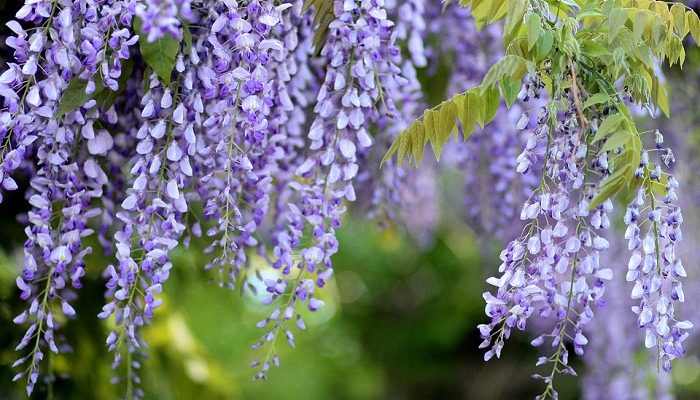 Meaning of the Wisteria flower

The Wisteria is a member of the pea family, Fabaceae (Leguminosae). It is a flowering plant and grows mostly in vine form, producing radiant fragrant flowers.

The flowers are of different colours ranging from blue, red-violet to lavender.

Origin of the Wisteria

The Wisteria has been around in China, Korea and Japan for over 2000years and arrived in the Eastern United States in the 1830s as ornamental plants. The first Wisteria was brought into Europe in 1816 by an English man. Apparently, he visited a rich Chinese dealer who had a pergola covered with flowering Wisteria and asked for some seedlings of the ’’blue vine’’ which he took back to England. In 1819, the plant bloomed for the first time and from there on spread to many gardens in the United States. It arrived in Italy around the year 1840.

The botanist Thomas Nuttall was said to have named the genus Wistaria, after a German anatomy and anthropologist professor named Dr Kaspar Wistar. Unfortunately, when pronounced with an English accent became Wisteria which was the name that stuck. Despite the acknowledgement of the mistake, the name remained Wisteria. It was originally called ’’Zi Ten’’ which means ’’blue vine’’ in China.

We have more than 20 species of this beautiful flower but the accepted Wisteria species and their descriptions are listed below:

The Wisteria is of great traditional importance in some countries like Japan, Korea, China etc. There is a garden – The Kawachi Fuji Garden- in the city of Kitakyushu, Japan, that houses a stunning 150 Wisteria flowering plants of different species.

The Wisteria Flower Tunnel is the main attraction at the Kawachi Fuji Garden, as it allows visitors passage through a tunnel filled with a brightly lit coloured scenery of flowers. This garden is open to tourists to come experience the beauty of the Wisteria. A festival is also conducted here at the end of the “Golden Week” from April 27-29, when it is known for the Wisteria to bloom.

Symbolic meaning of the Wisteria 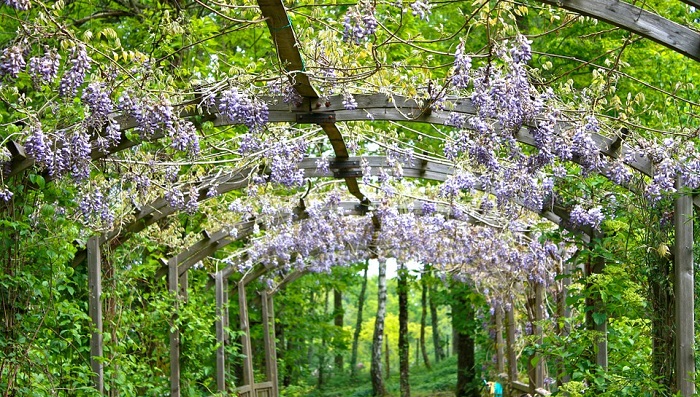 The Wisteria means different things to different people. If you have seen the wisteria plant when it has bloomed with all its radiant colours and fragrance emanating from its flowers, then you can relate to some of its symbolic meanings.

Ordinarily, from its lush beauty on a warm summer, the Wisteria gives a symbolic representation of beauty, fertility, love, creative expansion, long life and immortality, grace, bliss, honour, patience, endurance, longevity, exploration, releasing burdens, victory over hardships. Its appearance also gives the impression of harmony and peace to the onlooker.

The Wisteria is known to live for more than 100years and grows exponentially larger. Because of this broad lifespan and elegance, it is thought to be a symbol of wisdom. It is also said that the long climbing vines are metaphorically in search of new knowledge. Hence, it is also regarded as a symbol of wisdom, longevity, and endurance.

These are just elementary symbolic representations. The wisteria has a deeper history of symbolism in Chinese art, Japanese history, feng shui and also Buddhism.

The Wisteria is known to blossom eloquently in tapered clusters. This is considered a visual indication of bowing or kneeling down in honour and respect in Feng Shui.

In fact, practitioners of the Feng Shui are required to plant Wisteria in the corner of their homes. This can be a source of encouragement for them during moments of doubt by instilling quiet honour.

In the Kabuki drama “Fuji Musume” of the 1820s meaning “The Wisteria Lady”, a young woman waited for her lover under the wisteria vine. The Wisteria maiden is seen in a painting holding a wisteria branch until she falls deeply in love with a young man and steps out of the painting just so she could grasp his attention.

Unfortunately, her attempts were futile, her love was unreciprocated and she goes back into her painting dejected. This context juxtaposes the long-life, durability and resilience of the wisteria to the woman’s endurance in the face of heartache.

In Buddhism, the Jodo Shinshu Shin Buddist sect’s symbol has two conjoined wisteria racemes which represent humility to the sect.

The Wisteria is also a symbol of prayer to the Buddhist mind. It is from the idea that the growth of Wisteria forms a spiral pattern which is a mimic of a Buddhist’s symbol of prayer – a spiralling unfolding of the consciousness reaching out to the divine.

The Wisteria Is commonly referred to as “Purple Vine” in China. In a cluster, the petals are such that it shades from the strong, dark tip to the soft, light open base. It is thus said to symbolize playfulness and adventure.

The hanging blooms of the Wisteria recall the traditional purple sashes of top-ranking scholar-officials. Hence, it symbolizes social or professional success.

Looking at it from the Victorian language of flowers’ point of view, which literally says “I cling to thee” refers to the tight winding of its vine-like climbing habit. The wisteria is said to represent a warning against over-passionate love which is synonymous with the choking nature of the vines.

We must always keep in mind that the Wisteria is a voracious grower and can easily spread over a wide range of land. It can be destructive in its growth as it spirals out over large expanses, thus the need for consistent monitoring to avoid spiralling out of control. It has been reported to have taken down buildings with her burdening weight.

Symbolically, we can say it represents an external reflection of our expanding consciousness. It reminds us that the way we train our mind is essential to our own very becoming. If left unmonitored or practised without proper foundational knowledge may cause serious problems.

The Wisteria is one of the best ornamental vines stemming from the beauty of its drooping racemes forming a colourful curtain of scented flowers in spring and summer, its elegant foliage, its attractive trunks and twisted branches in winter and it radiant colours of different varieties.

Wisterias are available in a wide range of colours ranging from white, lavender-blue, lilac, pink, mauve, purple, lilac to rich pink. However, some Wisteria cultivars grow other colours such as pale pink, pale blue, deep violet, double deep violet, pale violet. The type of colour chosen depends on the occasion for which Wisteria is being used. For weddings white is selected, pink is to highlight feelings of love. Below is a list of Wisteria flower and their colours:

It is heavenly scented and blooms around late spring or early summer to produce long drooping clusters with fragrant pea-like flowers. The flowers are a combination of pale lilac-blue and deep blue with a yellow spot in the throat. It is also characterized by dense foliage of bright green, pinnate leaves which turns golden-yellow in fall.

It has a lovely scent and thick foliage with flowers of great beauty. It produces pea-like, pink and white flowers with a conspicuous yellow spot. It’s much more attractive feature is its dense foliage of fresh green, pinnate leaves. The Silky Wisteria flowers the first year of planting.

This is a beautiful white Japanese Wisteria with long clusters of pea-like, fragrant white flowers. The flowers are followed by attractive, green bean-like pods, and dense foliage of light green, pinnate leaves which turn yellow in fall.

It is noted for its exceptional fragrance and its clusters are characterized by pea-like, pale rose flowers tipped with purple, which blooms from the base of each cluster to the tip. It has dense foliage of dark green, pinnate leaves. It is the most romantic of all Wisterias and would surely make you have a second glance.

The Royal Purple is among the darkest purple Wisterias which produce sweetly scented, pea-like violet flowers. It blooms in late spring or early summer and gives rise to dense foliage of fresh green, pinnate leaves.