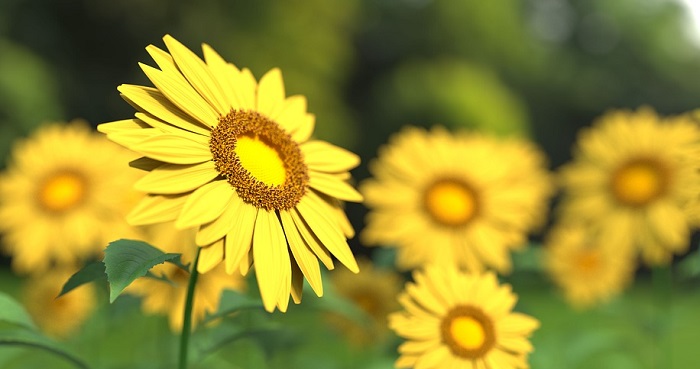 There is no great poem or any other work of art without flower symbolism. Flowers have inspired people throughout history and captivated their attention in many ways. Sometimes flowers represented positive and inspiring things, while other times they were symbols of something dark and deep.

With flowers, people expressed their emotions and feelings towards others, but also said goodbye or welcome to the ones who were going out or coming into their lives.

There is so much you can tell by only giving someone certain flower specie, without ever saying one word. In today’s text we will be talking about the sunflower symbolism and meaning and what it represented for the human civilization in a deeper more meaningful way.

Meaning of the Sunflower

Every flower hides its symbolic meaning and significance, and it can be widely known like the one of a Rose, or more secretive like the symbolic meaning of a simple field flower. The Sunflower has several meanings that are all linked to the positivity and optimistic nature of a Sunflower. 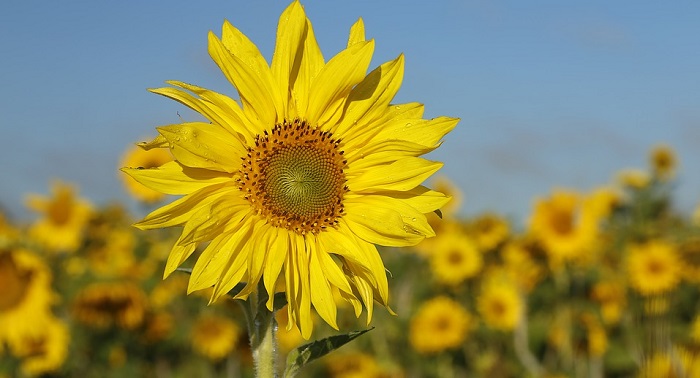 The name Sunflower came from the fact that this beautiful flower always turns its head or the flower head in the direction of the sun. Sunflowers love receiving sunlight and enjoying the warm sun rays on their petals, and this is something that ancient cultures noticed a long time ago. Scientific name for this flower is Helianthus, because it is a combination of the words sun and the flower.

Sunflower has been considered a symbol of joy and life, but also a symbol of loyalty and longevity. This flower radiates passion and positive energy, and turns its flowers and petals to the sun every day.

The name of sunflower, originated from the Greek words Helios – Sun and anthos – flower. The sunflower is a plant with a huge flower by which it was named, because its shape and image is often used to describe the Sun.

Various cultures considered sunflower as the symbol of the god of the Sun. In the early morning sunflower turns its flowers toward the sun in the east, monitors its path during the day to the west, so that when the Sun goes down its blossoming head is as if sleeping. According to this characteristic, the sunflower was named.

Since the sunflower follows the sun, the sunflower denotes worship and enthusiasm. His constant changing of the position gives him in some cultures and the meaning of unreliability and false wealth.

The sunflower originates from the southwest of North America, from Peru and Mexico. Nearly a thousand years before the new era, American Indians cultivated it and used it in the diet. They grind his seeds into flour, added them to bread and made oil. For them, the sunflower was a symbol of holiness and fertility, and its color is a symbol of vitality and energy. At their summer solstice sunflower was used as a symbol of reward, harvest and stock.

The ancient Greeks devoted the sunflower to the god of the Sun, Helios. In Greek mythology, the sunflower is a symbol of the sea nymph Klitia, which turns into a sunflower after mourning for the loss of its love, the god of the Sun of Apollo. When the sea nymph escaped into the desert, where she was without food and water, because God Apollo began to started a relationship with her sister, she watched the sun all day, and after death she became a sunflower. Symbolic are that the Nymph Klitti was always turned to the Sun and in the expectation that Apollo’s carriages would return. The sunflower is also in Greek mythology, the symbol of the nymph, Daphne.

Aztecs crowned their priests of the sun god with sunflower flowers. And the Mayans highly respected this flower and for them it was a flower of fertility and light. In the diet they used seeds, stems and leaves of sunflower, and prepared tea from his petals.

Color of a flower can sometimes have such a strong symbolical influence, but some flowers are richer in colors than others. Having less colors doesn’t mean that a certain flower is any less important in a symbolical sense, which is clearly shown in the example of a Sunflower. Sunflower comes only in one color, but this color is enough to express the strong symbolical meaning of this beautiful flower.

The yellow color of a Sunflower is a symbol of joy, optimism and positive energy. You get a stream of positive energy by only looking at this beautiful flower, and our days are already much happier by having to see these flowers in our close distance. They are also linked to innocence because of the, sometimes, cream colored petals on the sunflowers. Red and orange sorts of Sunflowers are symbols of passion and strength, while the brown and the burgundy shades of Sunflowers are symbols of loyalty and support for someone you love.

Sunflower comes from America (Mexico, Peru). It was first grown as a decorative plant, the seed was used for feeding birds, and people were eating the core from the seeds. In 1840 sunflower oil was first obtained. The seed contains about 50% oil, 20% protein and carbohydrates. Sunflower oil is made from margarine, mayonnaise, stearin (it is used in candles, plastic, soap, cosmetics and rubber softening), pharmaceuticals, paints, varnishes, etc. Sunflower heads have a lot of nutrients and can be used to feed domestic animal. It can be grown as oily or protein and as main, later and later crop.

The root has a good suction power, spindle, well-developed and penetrates into a depth of more than 2 m. The stalk is initially thin, suave, gentle and with aging becomes thick, strong and woody. Round, hollow, covered with hair, grow to a height of up to 4 m and a thickness of 2 to 6 cm. Heart shaped leaflets are on long stems. The petal is slightly toothed on the edge, on the top of the sharpened, as well as the pinch, overlaid with the hairs. The stalk ends with a flower head where flowers are placed. The diameter of the head can be 10 – 40 cm depending on the cultivar. At the edge of the head are infertile flowers (tongue-like) and in the center of fertile (tubular, 500 to 1000 pieces) and all are bright yellow. It blossoms from edge to center of head. The fruit is a monochrome, black, with hard cover (sunflower caterpillars cannot overlook it). The weight of 1 000 seeds is approximately 80g and the hectoliter weight is about 40kg.

Minimum germination temperature is 3 ° C and optimum 28 ° C. The most favorable temperature for growth and development, especially in the period of intensive growth, flowering, fertilization and seedling, ranges between 20-25 ° C. Temperatures below 15 ° C and above 25 ° C reduce the synthesis of oil in the seed. Plants can withstand up to -6 ° C.

Sunflower creates a great vegetative mass, so it needs lots of water. Lack of water is most sensitive at the time of shaping the head and seedling. The root system is highly developed and penetrates deep into the soil and drains water from deeper layers, so sunflower is highly resistant to drought.

For a successful growth and development, a lot of light is needed, which can be ensured by a proper assembly and arrangement of plants.

The best results are sunflower on deep, fertile and structured soils, poorly acidic and neutral reactions (chernozem and ruth black).

The sowing should start when the soil layer warms to ok 8 ° C, which is in the beginning of April. The holes are placed ​​on a spacing of 70 cm and a spacing of 25 to 30 cm. The sunflower is sown on the final assembly (no cut off) and at a depth of about 5 cm (8 cm is the lower limit for sowing). The amount of seeds depends on its germination and purity, weighs 1 000 grains and the density of the plant, and it usually takes between 4 and 6 kg / ha.

If sowing is done in dry soil, watering should be done. The elimination of weeds can be performed by plowing, digging and cultivating. If there is a possibility of irrigation, the crop is irrigated during drought, especially at the time of shaping the head, flowering and pouring the grain.

Sunflower ripens at the end of August and early September. The ripening runs slowly, the head remains less and less green, the seed has increased water content, and the seed that first ripens results from the head. If harvesting is carried out by a combine harvester, it is necessary to do it before the seeds begin to ripen, i.e. when the lower part of the head is too dark. Hand harvesting is performed by cutting heads, which can be dried on their own stems. The sunflower seeds should be dried below 10% moisture or even better fewer than 8% because the seed has a lot of oil and is broken.

Like we mentioned before, every flower has its own symbolical meaning and symbolism. Flower symbolism digs deeper into the human sub consciousness even though it might seem so mundane and uninteresting to some people. Sometimes this symbolism is widely known, while other times we are surprised by the amount of significance in small flower sorts that we can’t even believe it.

The Sunflower also has a hidden message just for you that you need to learn and understand in order to apply it on your life. This message is to always stand tall and to face everything with a head up high. This is the only way you should go through life and no other way. Sunflowers remind us about this every day, and we can see how their tall heads are always turned to the sun, looking for a brighter side of each day.