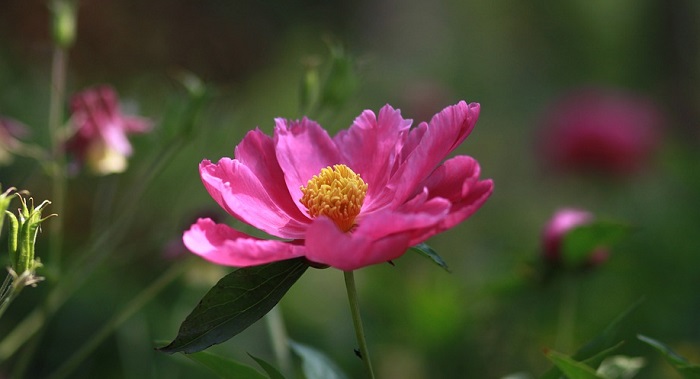 Chinese culture belongs to one of the oldest and the richest cultures on the planet. To sum up, the basic features of Chinese culture are virtually impossible, given that it is one of the oldest civilizations of the world with the complex interaction of various social, religious and philosophical influences. And in today’s modern China, we can come up with cultural elements that are rooted in ancient times, which are often different from Western models. That is why it is important for anyone who cares about any job related to China has at least the basic idea of ​​where social norms differ from what we are accustomed to in the West.

Flower symbolism in China has its special place and meaning. From Peony flowers to Lotus flowers, China enjoys flowers and respects them in their own way. There is almost no object or painting without drawings of flowers. The unforgettable plum flowers that decorate the pathways across China every spring are universally symbols of beauty and the upcoming warmer period. In today’s article we are going to talk about the symbolism of flowers in China and what they represent.

Meaning of the Chinese flowers

Meaning of Chinese flowers is many. Positive meanings of flowers in China are Orchids symbolize love and marriage but also fortune and money, Lots flower symbolizes union and harmony, but also heart and love, and the Lilies symbolize happy union and marriage between lovers. Winter is represented with the plum blossom, spring with Orchids, summer with a Lotus flower while the fall is represented with the Chrysanthemum flower.

Some of the negative meanings blooming trees, because they are symbols of infidelity. Duckweed is a symbol of bad roots or bad relationships between relatives. The thorny stems are symbols of pain and unhappiness.

Etymological meaning behind the lotus flower lies in the world lots or lotus which means bathed or washed or elegant and luxurious.

Peony flower is named after Paean, who was a character from Greek mythology. The name “sakura” for cherry blossom tree comes from Japanese language and the Chrysanthemum flower name is also based on an ancient Greek character.

Lotus – a flower that grows in dirty water, yet it succeeds to stay intact and keep all its beauty and grace! That is why this magnificent plant has always been a symbol of purity, nobility, wisdom and intelligence, especially in China, where it is considered that the lotus is actually the throne on which the Buddha sits.

It is also highly appreciated in India, where it is generally accepted as a symbol of eternal youth, universal beauty, and even life royalty. However, in Hinduism, it can also be found that the lotus is also a sign of reservation, and even wealth, which probably also arises from the abovementioned ability of this flower to not receive even the drop of sludge from which it originates.

In it we recognize the perfection of nature, the impotence and the spiritual growth of man. As the root of the lotus is in the ground, its stems in the water, the leaf in the air, and the flower facing the sun – so it also paints the unity of all the elements, and often this information is taken as a metaphor for learning, that is, the path that a man must to go to his maximum. 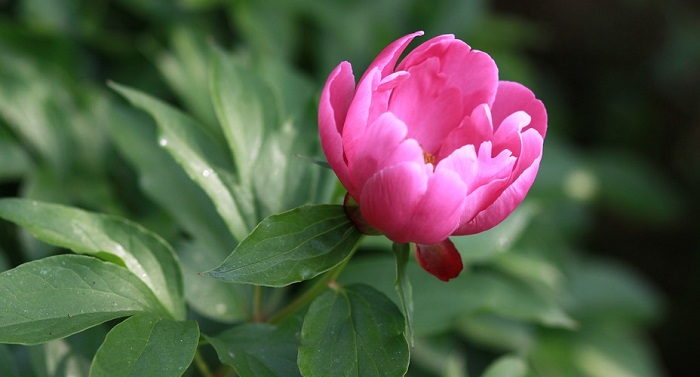 The general interpretation of the lotus is also reduced to the openness of the heart, the hidden potential, unimaginable creativity, and as it carries the so-called essence of life – it is thought that its petals have the power to refresh the spirit and body, bring to the state of nirvana, and regain the strength of the organism. The lotus flower, the world and the seed are at the same time an association of the past, the present and the future.

Although it is a poisonous plant, it is a cure for many diseases, and it is traditionally used in the East to reduce or completely eliminate the acute and chronic bronchitis. Feng Shui recommends that by adding this flower to our everyday life we ​​directly add a little “fire” energy that encourages progress in social as well as business relations, and thus also enables the increase in material wealth.

The most beloved plant in Japan is the cherry blossom, which opens its petals at the end of March and early April every year and becomes the main topic of all the conversations. To the Cherry bloom (sakura) Japanese artists dedicated thousands of verses and paintings and in her honor are organized a series of spring festivals.

Watching a cherry blossom (hanami) is a ubiquitous Chinese custom that includes people of all generations. The first flowers usually appear on the islands, then wider in the northeast and the rest of the country. Meteorological services and the media carefully monitor the situation, so that at the peak of flowering the entire nation could enjoy it.

Delicate cherry blossoms for the Chinese are a symbol of beauty and perfection, as well as the passing of life – as they fall from the crochet after two weeks. They also played a significant role in the life of the samurai, who identified her fragility with their call and fate for which they must be saved.

Orchids can often be heard to be the ideal flower for those who have unusual beauty, but at the same time they like simplicity, diligence and have an innate sense of design and aesthetics. However, if you plan to gift an orchid to a dear person, consider carefully when choosing colors.

By sending a Blue Orchid to a person you are sending a message that it is a rarity, unique, unique creature for you. It is a symbol of love, but in combination with the blue color of emotions permeates spirituality, so it is an unusual connection, something that is not so often.

On the other hand, for white orchids, you decide if you want to send a clear message that reads “you are dear,” because it symbolizes beauty and elegance, and it also has a dose of innocence that does not bind.

On the contrary, the red will emphasize your passion, determination, perseverance, and unconscious love, while its slightly lighter tones and pink color will emphasize the happiness and joy that fills you with the time spent with the person concerned.

If you want to give someone the title of the best, special friend, give him a yellow orchid, because it is precisely the symbol of friendship and new beginnings; while lavender orchids are usually given to mothers as well as to all women who represent elegance, grace, and femininity.

Something more glaring tones of this flower, like purple, are related to authority, respect, and admiration, so you can give them to someone you consider as your model or a respectable person. For whatever combination you can decide at the end – we are sure you cannot make a mistake. Who would have rejected this perfect flower yet?

In Feng Shu’s Peony flower has long been used as a symbol for love and romance, and this symbol is often considered a metaphor for a woman’s laziness. The image of the goddess is not recommended for older couples in the bedroom, due to possible adventures with younger women.

Peony is a traditional symbol of China, Mongolia, but also the Indian nation’s flower. He’s the motive and on the postal stamps. Peony symbolizes lust and romance, happy marriage and good luck. The bouquet bouquets are considered a sign of happiness when entering marriage and are therefore a common choice for weddings. The flower of the bouquet is often the 12th wedding decoration in the wedding bouquet.

Chrysanthemum, or the so-called “golden flower”, is one of the most beautiful plants that comes from China and possesses the power to attract happy circumstances into our lives. In the East, it is a symbol of the autumn, simplicity and ease of life, and at the same time it is the carrier of Yang energy, and thus itself leads directly to the Sun. In addition to the Chinese, which were breeding chrysanthemums as early as the 15th century BC, this flower is in positive position in Japan, where every autumn is celebrated by the Chrysanthemum Festival, also known as the Feast of Happiness.

And while in Asia, the chrysanthemum for its beauty and elegance belongs to a group of so-called “four gentlemen” (along with plum, orchid and bamboo), at the other end of the world is a symbol of death, so it is not surprising that in many European countries the chrysanthemum bouquet is most often reserved for burials and cemeteries. The Australians, on the other hand, are delighted to give the chrysanthemum to their mothers to show respect and love, while in America it is generally synonymous with joy and happiness.

However, the symbolism of chrysanthemum is most prevalent in Japan, where the flower (mostly golden colors) with sixteen double petals can be found on the state coat of arms, coins, and even on some documents.

Red, pink and white flower colors have a special meaning in Chinese culture. The color white is a symbol of ghosts and death, unlike the Western culture where it is a symbol of innocence and purity.

The red and pink flowers are symbols of celebration and life in general, and are often used during celebrations.

When planting a lotus flower the bottom of the pond should be covered with mud, height about half a meter. The depth of water should not exceed 1.5 m and be less than 0.7 m. If the water in the lake pre-deep lotus can be planted in a bowl that we will set to the depth mentioned. One plant is planted in each vessel.

Lotus can be grown in a pot, but you should choose a dwarf sort. The volume of the water-tight seal should be min. 20 l. Diameter of Lotus Planting Plate: 50 cm for large variety, 40-50cm for medium, 20-25 for dwarf varieties.

Chrysanthemums have always been a symbol of the Chinese imperial family. From the Far East, these flowers have captured the whole world. They call them autumn or winter rose. The planting in the garden and in the pots suits most of them. In order to preserve a ball-shaped bush, it should stand in a sunny place.

Chrysanthemums are propagated by cuttings, and they are planted outside, in the beds from April to the end of June. They need land rich in humus, which is deeply poor and fragile. Sprouted cuttings should be planted immediately after cutting. The best cuttings are taken from the shoots that go directly from the root.

Cherries are grown for consumption in fresh state, fewer breeding is made only for processed products (compotes, jams, marmalades, and confectionery raw materials) and are least grown exclusively for the production of liqueurs or brandy. Once chopped cherries no longer mature, so they have can be great decorations.

Depending on the flower, flowers can have various messages hidden behind them. Most of these messages are messages of love and celebration, and most of them tell us to use our lives for something positive and inspiring.

Chinese culture is big on self-care and mind-body connection, while material things aren’t a big part of the life’s journey.