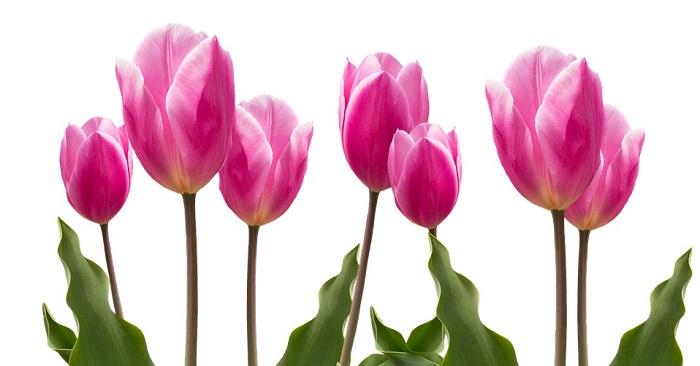 Tulip flowers are beautiful reminders of the summer and spring. Their gorgeous colors always make us feel bubbly and positive on the inside, no matter how bad of a day we might be having. Even imagining fields full of tulip flowers makes us feel warm and optimistic about the new day. Tulip flowers can grow on various places around the world, but their upkeep is not so easy.

People used to link flowers and other living beings from nature to divine beings and deities. Every flower had its own special meaning and symbolism that was highly respected and worshiped. No matter how small or unimportant the flower might seem to others, there is certainly a lot more to discover about it than we think. Tulip flowers usually originate from Europe and Asia. To other parts of the world, this beautiful flower was introduced after the development of commerce and trade.

Tulips were considered as symbols of love and romance, but they can have many other symbolic meanings. Some countries consider the Tulip flower as a national flower, and see it as more important living being in nature than others.

Every flower hides something interesting and fun we should all know about. Even if you are not so much interested in flower symbolism, it is good to have basic knowledge about nature and every being that is sharing the planet with us. If you wanted to know more about the Tulip flower, but you never had the chance to do that, here is an opportunity to expand your knowledge about this mesmerizing flower.

Meaning of the Tulip flower

Like I mentioned earlier, every flower has its own hidden meaning we need to understand. Sometimes flowers hide interesting stories we would be glad to hear about, and make our lives richer than before.

Perfection and love – The Tulip flower is a well-known symbol of love and affection. This is the perfect flower to gift to your partner to show how serious your emotions are. Not even the color of the Tulip is essential, because they are all generally considered to be symbols of love and perfect relationships. You can always choose Tulips to gift them to your partner since they are considered as unmistaken gifts to give if you want to show love. They are often used as decoration in weddings and even as flowers in bridal bouquets.

Passionate love – Tulips are great way to express your passion towards someone. They are great ways to say to someone that you really like them and that you feel attracted to them in a romantic way. This is a flower you can always give to your crush or to the person you find extremely attractive. They are great Valentine’s Day gifts, especially if they are in red or pink color.

Royalty – Tulips have been symbols of the royalty for centuries. They were considered pricy and they couldn’t grow anywhere, so their beauty would usually adorn royal pathways and gardens. Their presence meant that the person had more money than average so they are still considered as symbols of something that is not common and ordinary. 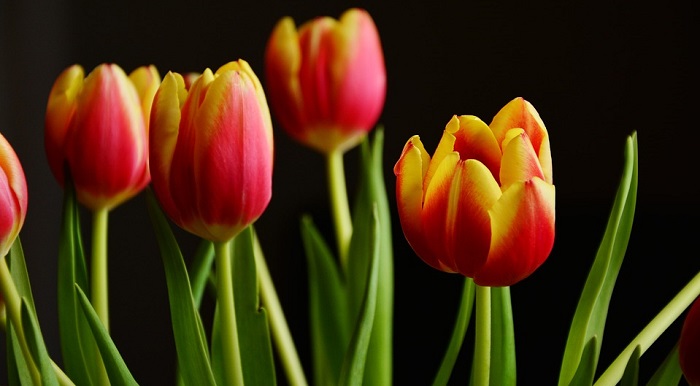 Prosperity, indulgence and abundance – This symbolic meaning is linked to the one that associates Tulips with royalty. They are symbols of rich and abundant lifestyle so we can find them often in celebrations and royal manifestations.

Supporting the less fortunate ones – Tulip flower is also a symbol of helping others who might be in greater need for things than others. Tulip flowers remind us to be humble and not to forget about the ones who need us the most. Their presence should motivate us to share more with others and to sometimes put their needs in front of ours.

The name Tulip might be short, but there is a very complicated and long history behind the name of this beautiful flower. Some etymologists trace the name Tulip all the way back to the Persian Empire. Persian word turban or delband was linked to the Tulip flower, because Persians loved to wear Tulip flowers in their turbans. T

his is just one of several explanations, but the more obvious explanation behind the name Tulip would be that this word was translated from several languages until it reached us. Tulip flowers usually have a similar name in various countries around the world, with only slight variations.

Tulip is one of the most recognized and beloved flowers in the world. It is universally known as the symbol of love and romance, and people usually gift this flower to the person they love. Tulip flower has a very long history of existence and it was often used as a symbol in art and literature. Tulip flowers can often be found in poems and in paintings of many famous artists. Their presence represented something symbolical that needed to be transferred to the viewer or to the person reading a poem.

Tulip flowers originated from Persia. Many poets in Persia wrote about these flowers and in one written by Musharrifu’d-din Saadi, tulips were described as a part of a beautiful and heavenly garden they were usually symbols of abundance and everything that is plenty.

In Turkish language, Tulips are called “lale”. When word “lale” is written in Turkish, it is spelled the same way as Allah so it became an important holy symbol. Tulip flower is also associated with the House of Osman, so many decorative objects are covered in Tulip flowers such as tiles, vases and crockery. To the people of Ottoman Empire, Tulip was seen as the symbol of wealth and abundance. There is even an entire era in the Ottoman Empire called the Tulip era, and this period is considered as the wealthiest period in the development of Ottoman Empire. In the Victorian era, Tulip flower was a symbol of charity and helping the poor.

The Black Tulip is a historic romance novel written by Alexandre Dumas. The story of the novel takes place in Dutch city of Haarlem. A great reward is offered to the first person who manages to grow a truly unique, entirely black Tulip flower.

Tulip flower is also a part of the Major Arcana cards, as the cards Arcanas Zero, Four, Fifteen and One. In Netherlands, Tulip flower is considered to be the main symbol of Dutch culture and heritage. The first book about Tulips was written in 1592 in Netherlands by Carolus Clusius, and since then they became one of the favorite flowers in the entire country. Tulip flowers became popular motifs in art and literature, especially during the Dutch Golden Age.

Tulip and the love symbolism got tied together in the 20th century. They are now symbols of love and romance around the world, and represent a very common gift for Valentine’s Day and weddings.

Colors often add something special to an object. They make it more symbolic and the hidden message gets transferred much clearer and more powerful. Colors have many different meanings both positive and negative that make our emotions more powerful.

Tulip flower comes in various colors and each color has its own special meaning hidden behind it.

Tulip belongs to the family of Lilies. These mesmerizing flowers are edible and can be used in cooking as ingredients. Tulip flowers aren’t used in medicine because their beneficial aspects haven’t been discovered yet. During the World War II, the Tulip flower was one of the main sources of food for the starving population in Netherlands. They have a high content of starch in their bulbs, so we can safely eat them and even feel filled afterwards.

Tulips can be grown in backyards and gardens in almost all parts for the world, but the only problem is that they can’t last for too long. Even while they are in the ground, they only show us their beautiful colors for a short period of time, and then they disappear until the next year. They don’t require too much care, but you still need to fertilize them and water them regularly.

Every flower has its own secret message, hidden only for us. This message is something we can derive from a certain flower and the way a certain flower fights against the hard living situations. The beautiful Tulip is telling us to never underestimate our beauty. There might be tons of beautiful flowers in the garden, but every flower is beautiful in its own way. The humble Tulip still stands out with its appearance without being too big, too extravagant or too unusual.

The simple appearance of a Tulip still manages to impress us and make us feel like we all deserve a small piece of attention. Every person is special in its own way, no matter how small, different or simple we might look at first glance. Tulip flowers managed to expand from simple flowers to beautiful symbols of love and affection.