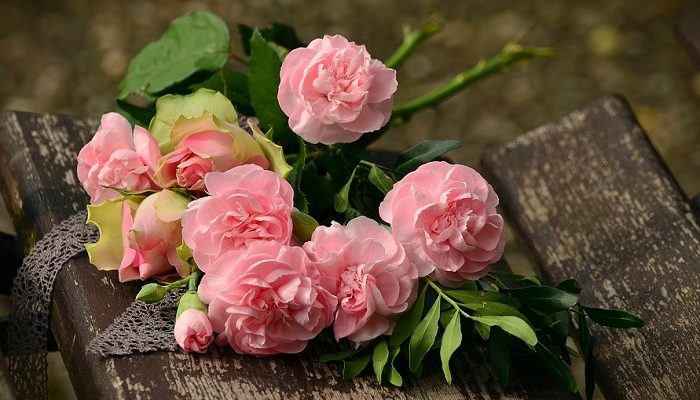 Nature has given us a multitude of flowers, from the most varied types and colors. But among all, the rose is the queen: loved since ancient times not only for its beauty and for its intoxicating scent, but also for its medicinal and cosmetic properties.

The rose belongs to the family of rosacea and if you could originally count about 150 species, the hybridization techniques developed over the years have given us varieties that exceed 2000 specimens.

The first rose fossil leaves date back about 4 million years ago. Since then this elegant flower, originating from Europe and Asia has fascinated many ancient peoples, starting from the Greeks.

The priestesses wore garlands of pink roses and walked gracefully over rose carpets. And it is precisely to the Hellenic people that the most romantic legends linked to this flower are linked: it tells of Adonis who, seriously wounded by a wild boar, was in vain rescued by his beloved Aphrodite, who, in going to meet him, was injured with brambles.

Roses rose from the blood of the goddess. Zeus, pity of so much suffering, allowed Adone to spend only four months in the world of the dead. From this myth was born the meaning that still brings with it the red rose, that is fidelity and love.

What Does the Pink Rose Mean?

The rose, in fact, occupies a prominent place in the language of flowers, where it takes on different meanings based on its color. The flower, in fact, develops or is hybridized in a wide range of colors that cover almost all the chromatic “spectrum”, with the exception of black and blue, even if in this last case they are also artificially dyed roses.

The boldest ones have even tried to color the black roses, but the blue ones work better, unless you want to cast dark messages or meanings that are not really positive.

In general, however, all the colors of roses have positive and rarely negative meanings. The color range allows you to choose between light-colored or dark-tinted roses. It will be precisely the intensity of the color that determines the meaning to be expressed or communicated to the world or to a particular person.

The colors of the roses, as already mentioned, cover almost the whole chromatic “spectrum”: from white, to yellow, to orange, to purple red and so on. All this variety of colors could not go unnoticed in the language of flowers, a language that sought and found all the possible meanings to be attributed to the various “nuances” of roses.

The meanings of the colors of the roses are initially identified in the most important colors, namely white, yellow, red and pink, and then go to deepen other more or less intense colors, such as orange, dark and light pink and all shades of red, like purple, carmine and so on. 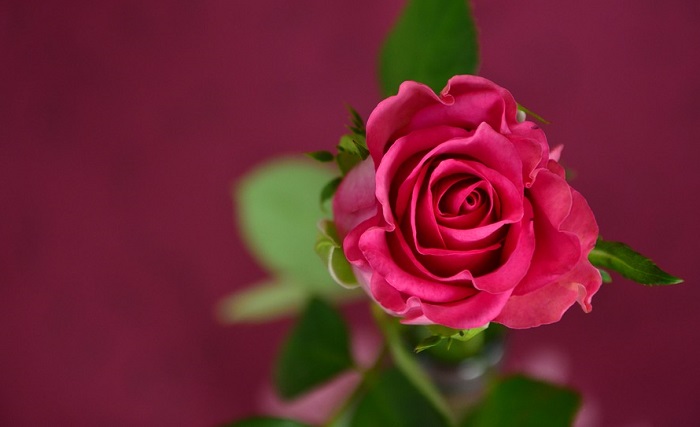 These are the main meanings of the colors of the roses. The nature and the various hybridization techniques have however led to the birth of roses with intermediate colors and with sometimes positive or negative meanings. The orange rose, for example, symbolizes charm, while that coral, desire.

The blue rose, for example, for culture or fashion, tends to symbolize honesty, wisdom and intellect, but also serenity, meditation and peace of mind. The black rose is not even on the market, even if the meaning of this color changes according to the culture or the country in which it is used. In the western world, black symbolizes pain, mourning and sadness, while in the oriental world it expresses serenity and gaiety.

Roses can be mixed gifts that are putting together different colored varieties. Pairings of two colors take on a certain importance in the language of flowers. In fact, giving roses of two different shades seems to want to express feelings and precise meanings.

The combination of pink and pink roses seems to mean: “I will love you forever!” The white and red roses express the English concept “Unity / Flower”, or ‘the flower of unity’.

The meaning of this concept is somewhat mysterious and emblematic, but it probably refers to family unity and solidarity in the relationships between people. Yellow and orange roses symbolize thoughts of loving passion or attraction.

Etymological Meaning of the Pink Rose

Rose has always been considered the queen of flowers and the garden. It is also the most loved and appreciated species. This flower is also the protagonist of the mountain forests, especially in its most common and common varieties, such as the glucose rose and the pendulant pink.

The rose belongs to the Rosacea family, the same from which the cherry and peach flowers derive. Of this magnificent flower there are about thirty varieties, to which are added numerous hybrids obtained through prodigious grafts. With the rose, or rather, with the roses, everything is possible, even expressing emotions and feelings.

Symbolism of the Pink Rose

The origin of the wild rose is in China and its natural growth extends across the northern hemisphere from China to the Middle and Near East to Europe. Over time, new varieties were created by breeding and crossing the flower. There are now about 30,000 different species. Spray roses are a type of rose and belong to the bed and small shrub roses. They carry whole flower tufts, so that many small flowers sit on a stalk instead of a single one.

The first rose gardens were established in China as early as 5,000 years ago, but before they were appreciated for their beauty and fragrance, they were a simple foodstuff. Over time, the rose gained its symbolic meaning as the flower of love and beauty. As such, it is still viewed over the millennia.

In the ancient Greeks, the rose is dedicated to the goddess Aphrodite, and to the Romans it is Venus. At the time of the Roman Empire, the roses were considered a precious luxury. At that time, people also used them to make perfumes and make remedies. In the middle Ages, the rose became the symbol of Christianity and found its use as a medicinal plant or in the preparation of food. In the 16th and 17th centuries, sailors brought the rose from the Far East to Europe and laid the foundations for European rose breeding.

The same Egypt used the rose and its oils to honor Isis, without forgetting the legend according to which Cleopatra walked on a carpet of roses in her home. The rose was also very popular in China, where it seems Confucius had a library with about six hundred books dedicated to the cultivation of this flower, and in the Republican Rome where he gave a crown of roses as a supreme military recognition.

The rose is made up of an erect stem full of thorns, from which many twigs branch out: perhaps because of the presence of these quills a flower so romantic was declared in the middle Ages “the flower of witches”, as the thorns were seen as tool of evil. The leaves are generally dark green or brown, have serrated edges and sometimes are covered with a hair that makes them pleasantly velvety.

The roses you find on the market are the Hybrids of Tea, characterized by the presence of a single large flower: in nature, however, there are many species of plants whose flowers grow to form almost a bouquet.

There are in fact at least 6 categories in which roses can be classified: botanical roses, spontaneous and resistant, among which are the Gallic pink and the dog rose; the ancient roses, hybrids of the botanical ones among which the damask rose with the red flowers in the cup; the common Hybrids Tea; climbing roses; miniature roses, born from the fusion of Tea Hybrids and minimal chinensis; bushy roses, hybrids between ancient and botanical ones, have large and very fragrant flowers.

The rose blooms in spring, usually in the month of May: if you want to grow a rose you can easily plant it in autumn, when the soil still contains the summer warmth. In case of cultivation in pot, it is possible to plant it in every season, avoiding periods of intense cold: the only caution is to ensure that the soil is always well drained and rich in organic substances.

The rose loves the ventilated environment and the sun, but not direct light and currents. To keep the plant always florid and lush, winter pruning is important, during which the flowers and the dry leaves are eliminated: it is important however that the cut is always made oblique and above the gem.

Autumn, i.e. the period when plant vegetation ends, is suitable for planting all plant species, and in particular planting roses. In particular, as far as roses are concerned, you can find: tea trees, multicolumn, climbers, gromolics, miniature, rouges, English roses, roses, roses of stems – stubble balls, stems falling down.

The rose is a woody bushy plant. All roses, and there are hundreds of varieties, grow in the form of a low or high bush – from 20cm to more than one meter. There are roses that are well tolerated by the winter; those who are well tolerated by drought, which suffer from low alkalinity in the soil. All these factors should be taken into account when choosing the roses that we will cultivate.

Soil preparation – Roses love a place with plenty of light, at least 3-4 hours a day, airy and free from moisture that is retained and suitable for the development of fungal diseases. They are flexible and resistant to central quality land.

To keep the plant always florid and lush, winter pruning is important, during which the flowers and the dry leaves are eliminated: it is important however that the cut is always made oblique and above the gem.

However, in order to have a beautifully grown rose that will flourish throughout the season, prepare the land before planting. If the soil is waterborne, drainage by draining the water drainage channels. Mix clay soil, loam or sandy ground with humus or compost to improve the mineral composition.

Also, roses should never be planted in a place where they were previously roses.

Be it fire red or burgundy; declare your eternal love by giving a rose of this color, which has always symbolized a love stronger than anything, even thorns. Together with the yellow roses, you will express a message of solidarity.

The intermediate colors of the roses and the various chromatic tones have given rise to really unique and interesting meanings. The peach-colored rose, for example, symbolizes a secret love; the light pink color expresses affection, friendship and understanding; that dark pink, gratitude.

The meaning of extreme colors, such as black or blue, does not exist in the language of flowers, even if these shades are usually obtained with artificial colors.

It is the symbol of purity, humility and innocence, so much so that it was the first to be cultivated in monasteries as it was associated with the Virgin Mary. A bouquet of white and red roses symbolizes unity.

Pink rose: if you want to communicate to a person how refined and elegant this is, give a bouquet of pink roses as there is so much admiration and friendship that you will transmit them. It’s most intense, almost fuchsia tone means gratitude. Be it lilac, lavender or dark purple, the flowers of this color surprise and amaze so much as to mean royalty, enchantment, but also certain abundance. In the lilac variant it symbolizes lightning strike.

The Pink Rose Message Is

The meaning of the Pink rose is: “I love you.”