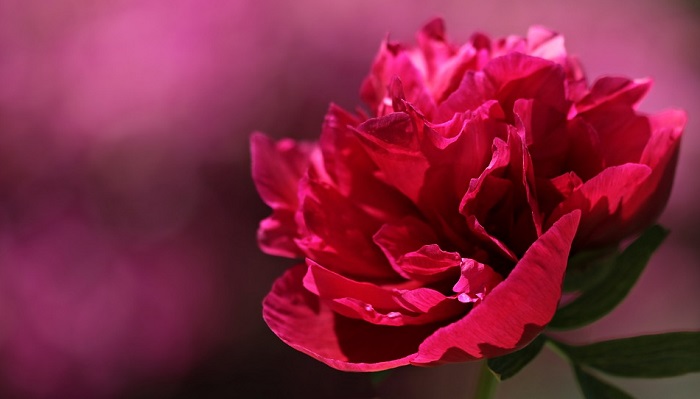 Flower symbolism is there to teach us more about the symbolical value of flowers, but it can also be a great source of information about history and other areas of human work.

Flowers have often been used as symbols in art and literature and their symbolical significant are tremendous. When artists wanted to tell something forbidden to their audience, the only way they could do that was with the help of symbols.

Flowers were there to express every shape of human emotions and remind us about the importance of symbols in general. Flower symbolism dates back hundreds of years, when people used flowers in their religious ceremonies and other important events. Flowers were there to express the importance of an event and remind others to pay respect to the event that was being help.

Meaning of the Peony Flower

Meaning of a flower can tell us so much about its existence and the way people used to see it. Meaning of the flower was created by people and stories that grew out of these meanings are something that lasted until today.

Every flower has its own symbolic meaning and the meanings of the Peony flowers are:

Honor – The Peony flower is a symbol of honor and this meaning goes especially for the people who made their families proud through some kind of success. This symbolic meaning certainly makes the Peony flower a great gift for those who just graduated or made any other kind of successful act.

Romance – The Peony flower is also a symbol of romance and love. The beautiful Peony flowers can be a great gift for someone who is your crush or for your partner, especially if you want to show how deep and serious your emotions really are.

Bashfulness – The symbolic meaning of bashfulness and shame is also linked to the Peony flower. This gorgeous flower has these two negative associations and you need to be careful when gifting someone this flower, because you might send this message as well. 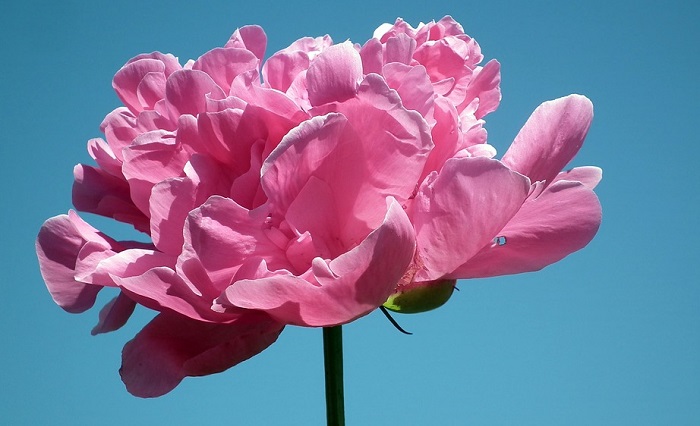 Wealth – The Peony flower has long been a part of royal gardens and balconies. These gorgeous flowers stood out because of their gentleness and fragile beauty, which made them a status symbol and one of royalties’ favorite flowers in gardens.

The Peony flower is also known as the Paeonia. This second name is actually the scientific name for the Peony flower and it is being used in many countries around the globe, which makes it easier for people to recognize this species.

The name Peony comes from the Greek name Paeon. He was a student of Asclepius who was the god of medicine. When student showed greater knowledge than his teacher Asclepius, Zeus decided to turn the young Paeon into a beautiful flower and stop his progress. After this event, this beautiful flower was named Paeonia.

Peony is a gorgeous scented flower that has been adorned with gardens since ancient times. Various beliefs and symbolism are associated with peony. The origin of the symbolism of peony originates from the East where, due to its gloomy holding and red color, colors of life, beauty, wealth and unification, this flower symbolizes honor and wealth. His symbolic meaning is the inspiration for various forms of art.

Some botanists claim that the first peony in England brought Roman legions back to 1200. It is said that this flower has been described in botanical books as early as 1636 and is being cultivated in Europe for more than 600 years. Initially, he decorated the gardens of the rich and the imperial gardens, and is also called the imperial flower. The flowers of woody peony in Europe were transmitted about 200 years ago, but only recently, this grateful and durable plant began to grow larger in gardens.

The name of peony originates from the Chinese word show you, which means the most beautiful. Pineapple in China is a symbol of wealth, beauty and honor, probably because of its red color, and along with the flower of plums is the traditional symbol of China.

Japan has accepted peony and beliefs similar to Chinese. Both in China and Japan, peony is a symbol of good fortune and peace, especially when displayed in full bloom.

In Chinese art peony is used symbolically. The motifs of peony, especially red, can be found in famous Chinese silks, Chinese dishes, and wooden carvings.

Pigment symbolizes beauty and romance, happy marriage and good fortune. Peony bouquets are considered to be a sign of happiness when entering into marriage and are therefore a frequent choice for weddings. The flower of peony is often the 12th flower in a bridal bouquet.

Pureness symbolizes shyness. In the Victorian era, naughty nymphs were thought to be hiding in the magnificent petals of this flower.

Peony is a traditional symbol of China, Mongolia, and also the Indian state flower. He is also a motive on postage stamps.

The Serbs of peony are often used in love magic, in those passionate moments in which the girl is eager to win the heart of the young man she liked. It is believed that the rooted root of the peony above the cradle preserves the newborn from the hideous views.

Pine is considered a plant that protects the body, the spirit and the soul, attracts happiness and helps to refuse negative energy and break the curse. That is why he was often planted in the garden to protect the home from evil, and his seed and root were used as a protection.

In the feng shui, peony has long been used as a cure for love and romance, and its symbol is often considered a metaphor for female beauty. The image of peony is not recommended in the bedroom of older couples, due to possible adventures with younger women.

In the cosmetics industry, peony is most often used as a perfume essence. Perfumes containing the essence of the flowers of peony underscore the femininity of the lady. It is believed that ladies who like these perfumes are probably sometimes stubborn.

Colors of the flower can add a lot to the overall symbolic meaning of the flower. It is certainly not the same if you gift someone a red rose and a yellow one, therefore colors have a very strong impact on the message we want to send.

Peony flower comes in several colors and they are:

Peony belongs to the flowers that are most grateful for caring. Luxurious flowers in white, pink, red, purple or yellow are the most beautiful summer decorations in the garden. It originated in China, where it grew over 1,300 years ago.

In the beginning Peony decorated the gardens of the rich and the imperial gardens, and he was also called “the imperial flower”. The flowers of woody peony in Europe were transmitted about two hundred years ago, but only recently; this grateful and durable plant began to grow more massive in Euopean gardens.

The peony is a floral shrub that reaches a height of one to two meters. During May, it forms large flowers of white, yellow, pink, red or purple. The burning peony can grow up to one meter. In the early spring, dark red shoots appear, and the leaves remain green after flowering until the autumn.

Depending on the variety of flowers from mid-May to mid-June. Woody peony grows like a bush that adorns exotic flowers in the shape of a bowl, a cup or a bowl, and can reach up to 25 cm in size. The flowers of woody peony can be simple, double or half-hearted and resemble anemone flower.

Peony works well in sunny or semi-durable spots protected from the wind. The most suitable for him is fertile, sand-loamy and moderately humid, deep soil. It does not tolerate moisture or acidic peat substrate. Positions exposed to morning and afternoon sun that can cause burns on the leaves should be avoided. Wooden peony must be sheltered from cold winds that drain the soil.

Woody peony is most often planted in half-lengths in order to extend the flowering time. For large flower shrubs it is necessary to provide support to avoid laying flowers after heavy rains.

Peony belongs to perennials, which means that it remains at one place for 10 to 15 years. Therefore, you should prepare the land on which it will be planted, which means deep digging and shredding of the soil. The pestle is planted in pits which are between 50 and 60 cm deep and 60 to 70 cm wide. In the bushy peony the root is covered with 3 to 5 cm of soil. The peony of the peony is planted so that the grafting site is 10 to 15 cm below the surface of the earth.

The most favorable planting time is from mid September to October. Plant seeds can be planted throughout the year. At the bottom of the fruit pit, a drainage layer of 20 cm thick should be placed, then a layer of high quality humus and octagonal fertilizer, and again a layer of good soil. Take care that the root does not come in contact with the fertilizer. For woody peony it is characteristic that from planting to bloom several years pass.

During the vegetation period peony is moderately watered. The moisture is the most important for the plant at the time of growth until flowering and during July. From the third year of peony, spray it in the spring with 50 g of mineral fertilizer per bloom, and in the summer months after flowering with organic fertilizer containing higher amounts of nitrogen (compost or manure).

Young peony should be clipped slightly to get a nice and proper shape. Woody peony trees are trimmed only by branches that make the shrubs too thick or irregular. Trimming is done late in the early spring, while the plant is still in hibernation, at the end of the summer or early autumn, in order to avoid leakage of plant juices.

Reproduction of peony is done in autumn at the end of the vegetation period (after leaves go brown) or in the early spring. Each separated part must have three vegetative peaks. During winter, peony is reproduced with root cuttings. Woody peony can be reproduced with semi-cut cuttings in summer months or stakes during the winter.

Flowers have often been used as symbols in art and literature and their symbolical significant are tremendous. When artists wanted to tell something forbidden to their audience, the only way they could do that was with the help of symbols. Just like every flower has its own symbolic meaning, it also hides a message we need to understand and implement in our lives.

This message is to stay honorable and respectful towards others, because our actions affect other people. You should always keep your head up high and act towards others the way you want to be treated. The Peony flower is also telling you to take care of your inner and outer beauty, and to always treat every day like it is the most special day in your life.