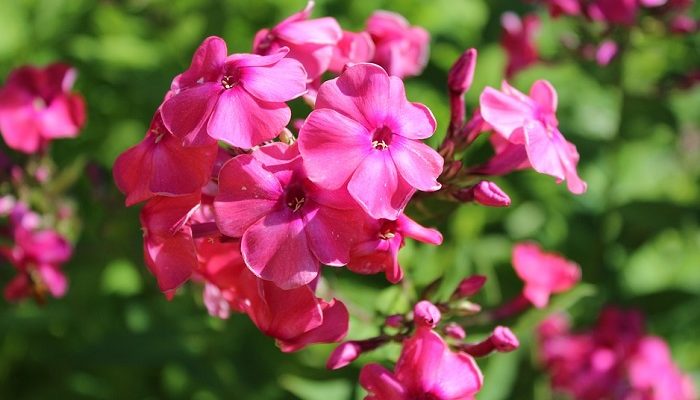 For our usual appointment with the heading on the meaning of flowers, we will talk today about a very particular flower, which surely many of you have seen in different types of decks and in specialized shops but that never have associated with a specific name.

We will do it today for you by talking about floxes or phloxes.

What Does the Phlox Flower Mean?

Flame flowers know most hobby gardeners especially under their botanical genus name Phlox. The most famous is the High Phlox (Phlox paniculata), a classic cottage garden shrub that belongs to the summer like the sun.

During the middle of the year, it blooms tirelessly and colorfully, spreading its unmistakable summer scent. But the big phlox family has many other species that can be found in almost every garden. So you can use Phlox to create a garden that is in magnificent bloom from spring until the first frost.

The Phlox (Phlox) are a genus of plants in the family of Verbenaceae (Polemoniaceae) and come almost without exception from North America. The Siberian phlox (Phlox sibirica) is the only species that is native to North Asia.

The most popular species for the classic perennial flowerbed come from the lowlands of North America and are characterized by countless, mostly fragrant flowers and symmetrical inflorescences, which makes them immensely decorative. In addition to the well-known tall shrub phlox (Phlox paniculata), there are about 60 other phlox species, many of which are suitable for the garden.

Another group are the upholstery-growing Phlox (Phlox subulata) and the Wandering Phlox (Phlox stolonifera). Because of its enormous popularity Phlox has been cultivated since the 18th century as a garden plant and the number of available varieties is now in the triple digits.

Many species carry their flowers in large panicles on stems over opposite, simple green leaves.

The palette focuses on pinks and pinks in the phlox, but is enhanced by white, purple, blue (for example, Phlox paniculata ‘Blue Paradise’) and mixed-colored flowers. The flavors of the phlox range from sweet-scented fragrances to the scent of violets to a tart herbal aroma that attracts large numbers of moths and bees.

But beware: Not all Phlox species smell! In general, the intensity of the fragrance of the phlox flowers depends on the temperature. The strongest odor unfolds at the warmest time of day, depending on the location around noon or evening. 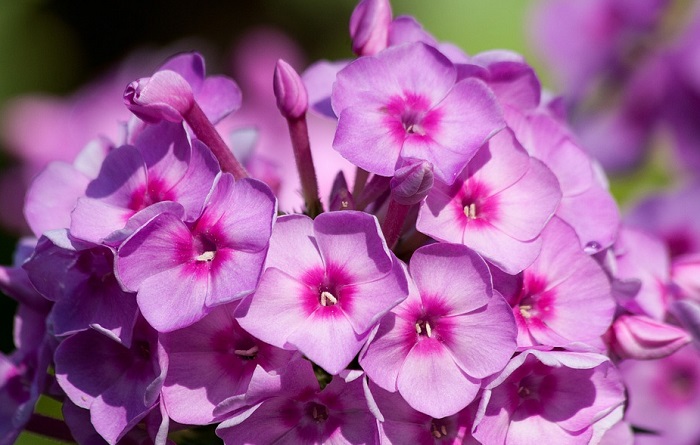 Etymological Meaning of the Phlox Flower

Whether in the rock garden or in the colorful shrub bed – Phlox adorns every garden.

The popular perennial phlox (Phlox paniculata, also known as “High Flaming Flower”) is one meter high and an impressive flowering in pink, purple, light blue or white, one of the most beautiful flowers in the summer farm garden with by far the largest variety under the phloxes.

The sturdy, competitive and healthy large-leaved phlox (Phlox amplifolia) is ideal for shadier garden sites under trees that are not well suited for Phlox paniculata varieties.

Symbolism of the Phlox Flower

It is an annual perennial plant, which if planted with a particular and precise timing allows you to have your own flower garden all year round. Small and colorful flowers, suitable to create very special borders (for some time I have used them in my garden, a truly incredible show in terms of color, ed), especially if you tend to their dwarf version: they have a truly incredible grounding capacity . Sufficiently resistant to diseases, perennial sowing tolerates cold well enough, the “seasonal” sows usually sown in September prefer higher temperatures.

Phloxes are able to revive the place where they are placed in spite of their simplicity and above all do not need special care to grow: they are the ideal flower even for those without a green thumb.

The name of this plant derives from the Latin word with which they are still recognized, “phlox”, which means “flame”. This is because the shape of the flowers and leaves, and their colors, vividly remind the element of fire.

We talk about flowers grown and used even in the Middle Ages. The knights adorned their garments with these blooms, particularly appreciated by the ladies for their faint but persistent scent.

The legends narrated by the storytellers want the brave fighters to leave the flower at the end of the evening to the woman who had been at their side for the duration of the festivities. And it is from this particular that the meaning attributed to the floxes derives: in the language of the flowers they represent complicity and understanding.

Since Phlox varieties are sold as container plants, like all perennials, they can be planted virtually all year round from spring to late summer. Annual and smaller specimens will be placed in the bed in May. Phlox is usually very vigorous, therefore the plants should be placed according to size with a distance of 20 to 40 centimeters in the bed.

Especially the species in full sun locations like Phlox paniculata need plenty of water during the summer. A layer of bark compost protects against dehydration. Regular fertilization with compost contributes to the pompous flowering and permanent health of the perennials. Since especially the larger Phlox breeds are not very long-lived, it is advisable to divide the perennials after six to ten years (meadow phlox already after three years) in the spring and to place in a new location.

Pre-bloom, which promotes the after-flowering and improves plant health. Phlox is extremely sensitive to changing weather or climatic conditions. Depending on the location, soil quality and weather conditions, the plants may show different vitality and flowering from year to year. Give new or transplanted phloxes three to four years to get used to the new location.

Especially the high upholstery phlox often grows very dense and is then particularly susceptible to mildew. When one removes about one third of the shoots in well-ingrown plants in the spring, it grows more airily and the leaves dry up faster after rainfalls.

Who chooses the high perennial phlox not only by color, but also by stature height, can thus produce a magnificent flower wave in the bed, as here in the mixed cottage garden bed with sun hat and daisies

Perennial phlox is propagated by division in the fall. To do this, carefully dig up the rhizome after flowering and divide it into smaller pieces with a sharp spade.

After the division, the individual pieces should be used at a different location again as deep as before. In many other Phlox species, the propagation of root cuttings works.

For this purpose, five to ten centimeters long, thick-fleshed root pieces are taken from the mother plant and buried horizontally in Anzuchterde with sand. Keep the substrate slightly moist and soon new shoots will appear.

The propagation through head cuttings is also very simple: Cut about 15 centimeters long shoot tips of the mother plant, remove the lower leaves, dip the cut surface in potting soil and put the shoot in potting soil. The shoots are rooted very quickly and are planted out as soon as the seed pot is well rooted.

The right location for Phlox is light and airy, so leaves and flowers can dry quickly after a downpour. Depending on your needs, there are phloxes for the partial shade or the full sun. The more sun the plants get, the more abundant flowering and fragrance.

The soil should be nutrient-rich and well-drained for species native to floodplains. Most of these specimens are coping well with damp soil, but they cannot tolerate waterlogging or persistent leaves.

The up to 170 centimeters large Phlox species thrives in drier locations and flourishes perennially from July to September. Unfortunately, he lacks the beguiling fragrance that enchants many of the Phlox species.

For under plants or garden corners in the clear shade, Wander Phlox (Phlox stolonifera) is the right candidate. With its short foothills, it spreads extensively along woody edges and among shrubs.

The numerous flowers glow in May and June in strong pink, white or blue and smell even at night. The meadow phlox (Phlox maculata) scores with huge cylindrical flower spikes and a long bloom from June to August.

Similar to perennial phlox, it is suitable for a sunny spot in the perennial flowerbed. Already in April, the low forest phlox (Phlox divaricata), also called blue phlox, begins to bloom in the light shade. He fills the still bald spots between late-expelling perennials with its characteristic blue but also white flowers, which seem to float gracefully over the foliage, and exudes a lovely fragrance.

The Phlox color coms in many different colors. In the bed design should be careful not to mix too many colors, especially in high species, despite the great temptation, since the phlox flower is very abundant and planting then especially in their long-distance effect quickly exaggerated gaudy. Restricting to one or two shades, on the other hand, makes the bed appear calmer and more refined.

Combine varieties with different flowering times, so that you can enjoy the phloxes blossom fireworks for months. The high Phlox varieties such as perennial phlox or meadow phlox, but also fragrant small forest Phlox varieties are very suitable as a cut flower for romantic bouquets.

The Phlox Flower Message Is

The message of the Phlox Flower is: “May this gift brings you luck.”